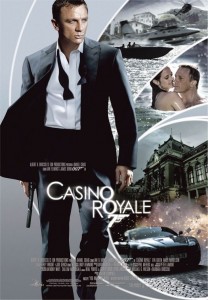 Casino Royale is different to other bond films for two reasons. The first reason is that the film marks David Craig’s debut in the role and the second is that it is just different to other Bond films. Casino Royale is based on Fleming’s first Bond novel and introduces Bond, narrating the events behind his promotion to ‘double O’ status and the romantic backstory to his subsequent charming but commitment-phobic relationship with glamorous women. The story of the book has been dropped into the near past, sometime vaguely recently post-9/11, presumably to allow the film and subsequent instalments to have a contemporary backdrop.

The film is light on gadgetry and is less action-oriented than the Bond films we are used to instead developing the character of the man behind Bond. In many ways it can be considered ironic that many fans and critics have hailed it as the best Bond movie to date, considering that it represents a significant deviation from the stylistic genre that is what surely makes Bond fans Bond fans. It begs the question of whether fans like the rest of the films because they are good films, or simply because they are Bond films, living on the cult of an outdated approach. But I digress.

Popular opinion is that Craig is the best Bond since the great Sean Connery’s inhabitation of the role. Which begs another question, namely whether it would ever be realistically possible for any actor, no matter how well he fills the role and how good the films he appears in are, to ever be acclaimed as superior to Connery. It probably has to be accepted that Connery’s Bond will forever be considered to be the default ‘best’.

Nonetheless, Craig is impressive in the role. His theatre and ‘serious actor’ background lend a different flavour to this interpretation. He’s also the first bond to not have dark hair, which may not seem particularly important but is another sign of the Director’s willingness to break Bond norms.

The casino connection comes from Bond’s strategy to defeat villain Le Chiffre by guile rather than brawn, beating him in a high stakes card game. The slightly tenuous reasoning behind this cunning plan is that cleaning out Le Chiffre in poker will leave him destitute and his network of terrorists bent on destruction of peace loving society without the resources to achieve their aim.