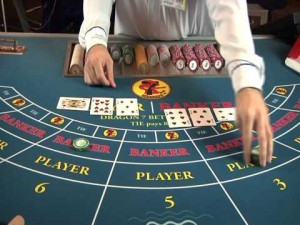 Baccarat is a game with a lot of history, having roots that stretch right back to fifteenth century France and Italy. The game is a close cousin of Chemin de Fer, an old French game but Baccarat takes its name from baccara, which means zero in Italian. In Baccarat the face cards have a value of zero. The game has been played across the world since then but was introduced in US casinos in the late 1950s. In European casinos you can find both Baccarat and Chemin de Fer.

In its early casino days Baccarat was known as a game for the highest of high rollers, referred to as ‘whales’, and famous for attracting the biggest spenders and being out of the reach of regular casino players. Baccarat comes in both a 14 player format and a 7 player game. The seven player game is the one that you will see most often on the casino floor. It is faster and minimum bets are usually lower, starting at $5 or $10. Larger or boutique casinos that host the 14 player game often have it roped off from the rest of the casino.

Baccarat is a game where the casino has one of its lowest edges, at around 1.7%, a feature that many players find attractive. It’s also mainly a game of chance and being an average player puts you at far less of a disadvantage as is the case with many other games.

Each player is dealt two cards and the players bet on which hand has a total which is closest to nine. Tens and face cards are all worth zero and the rest of the cards their face value and the ace counting for one. If one player has an eight or nine this is a ‘natural’. If the banker doesn’t have at least equal cards the game is over at this point. Hands that total 6 or 7 or higher than nine also remain as they are. If a hand is 0 to 5 a third card is drawn.

Players can also bet on two or more hands being tied, which is usually paid out at 8/1 if it comes off. As is probably apparent, there is no real strategy or way to influence this game and it is an exercise in guess work. It’s more about the ritual than anything else.

Menu
We use cookies to ensure that we give you the best experience on our website. If you continue to use this site we will assume that you are happy with it.Ok